The Gerry Rodeo is a fund raising event to support the Gerry Volunteer Fire Department Inc. 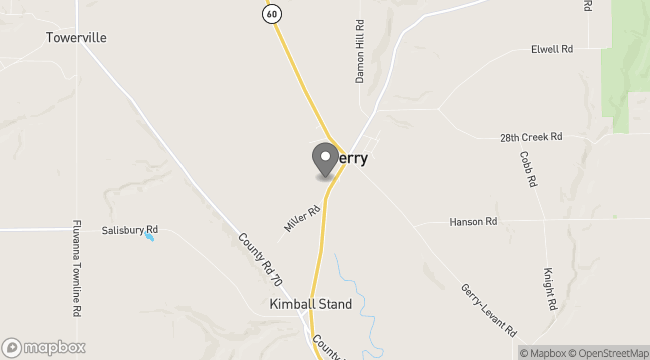 Back in 1945, many thought that the idea of a rodeo wouldn’t succeed for even one year, but they were certainly wrong for when August rolls around each summer, the tiny hamlet of Gerry just north of Jamestown, New York, will continue its tradition of the longest running PRCA rodeo east of the Mississippi. For four days this quiet little village becomes "The Rodeo Capital of the East" as approximately 225 professional cowboys and cowgirls roll into town and pay their entry fees to compete for more than $50,000 in prize money in four performances.

The event, sponsored by the Gerry Volunteer Fire Department, got its start in 1945 when a former working cowboy named Jack Cox moved from the West to Gerry and suggested a rodeo as a way of raising money for the newly formed fire department. In spite of the doubters, his dream became a reality as members of the department and other volunteers in 70 days turned four acres of swampland into an arena and parking lot in time for the arrival of the renowned Colonel Jim Eskew and the livestock that first year. Bleachers were borrowed from area schools and portable lights were rented.

In those early days the stock arrived by train in the middle of the hamlet, traffic was stopped, and the animals were herded down the middle of Route 60 to the rodeo grounds by volunteers, making for some exciting moments. Today the stock arrives by modern semi trucks, but the excitement of rodeo time still fills the air. Several hundred volunteers of all ages pitch in to make the event possible each year, filling jobs from painting fences to serving the famous beef barbeque dinners.  Many residents take their vacation just to volunteer, and others who have moved away return to help.