Marc Ribot, who the New York Times describes as “a deceptively articulate artist who uses inarticulateness as an expressive device,” has released 25 albums under his own name over a 40-year career, exploring everything from the pioneering jazz of Albert Ayler to the Cuban son of Arsenio Rodríguez. His solo release, “Silent Movies” (Pi Recording 2010) has been described as a “down-in-mouth-near master piece” by the Village Voice and has landed on several Best of 2010 lists including the LA Times and critical praise across the board, and 2014 saw the monumental release: Marc Ribot Trio Live at the Village Vanguard (Pi Recordings), documenting Marc’s first headline and the return of Henry Grimes at the historical venue in 2012 and included on Best of 2014 lists such as Downbeat Magazine and NPR’s 50 Favorites.

2021 continues with a flurry of releases including Ceramic Dog’s “HOPE”, recorded during the pandemic, plus two reissues on vinyl for the first time: 1993’s long out-of-print “Marc Ribot Plays Solo Guitar Works of Frantz Casseus” & “Silent Movies” (2010). Additionally, Marc’s first collection of writings, “Unstrung: Rants & Stories of a Noise Guitarist”, will be published by Akashic Books this August with an audiobook also in the works, and Marc’s original score for limited series documentary, “Queen of Meth”, will premiere on the Discovery Channel.

“…he can sit down with just his guitar and simultaneously confound you with technique, beauty, and surprise.” – John Garratt and Will Layman, PopMatters Picks: The Best Music of 2010 for the album “Silent Movies” 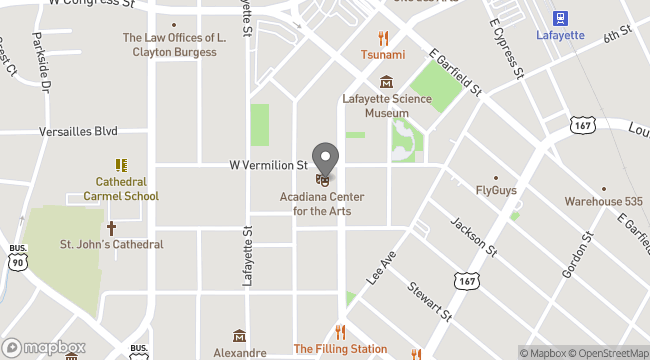 Our mission is fostering art and culture in Acadiana.

Founded in 1975, Acadiana Center for the Arts (“AcA”) is a community-supported nonprofit organization that fosters art and culture in Acadiana. Since its founding, AcA has developed as a major force, shaping the future of public education and community development in South Louisiana.

In 2013, the AcA merged with the Performing Arts Society of Acadiana (“PASA”), whose mission was to educate, inspire, entertain, and culturally enrich the people of south Louisiana by providing local access to a diverse range of the performing arts. This merger supported the vision of both organizations and provided much-needed support to PASA’s programs. Founded in 1989, PASA served as a leading voice in the performing arts in South Louisiana for close to three decades.