The Ghost Guild is excited to once again be offering this two in one event... This investigation takes place the night of the Azalea Festival fireworks display over the Cape Fear River, and the fantail of the battleship is by far the best location to enjoy the show.

Our best experiences aboard this ship have occurred after a fireworks display... Could it be that the sound created from the fireworks, mimicking the sounds of battle, serves as a trigger that increases activity aboard the ship? One only needs to close their eyes during the fireworks to experience an auditory simulation of being under attack.

After watching the fireworks from the best vantage point in Wilmington, we will break into small groups and proceed with a controlled investigation of the most decorated battleship of World War II until 3:30 AM the following morning. Hands-on training will be provided by the leads of each individual group, and all will have the opportunity to participate in experiments to hopefully help solve mysteries from prior visits aboard the ship. This event includes access to areas of the ship that are not available as part of the self-guided tour.

Participants must be at least 18 years old and will be required to sign an electronic liability waiver and agree to our code of conduct prior to boarding the ship and participating in this event.

The Ghost Guild reserves the right, at its sole discretion and with or without notice, to postpone or cancel this event for causes beyond The Ghost Guild, Inc.’s control. Such causes shall include, without limitation, the laws, regulations, acts, demands, or interpositions of any Federal, State or Local Government Agency, acts of God, fire, flood, weather, anything that jeopardizes the health and safety of participants or volunteers, or any other cause whether similar or dissimilar to the foregoing. If an event is postponed, tickets will be transferred to the new date. If the right of cancellation is exercised, participants will be informed as soon as possible and contributions will be refunded. Tickets are non-refundable for any other reason. We are not responsible for the cancellation or rescheduling of the Azaleas festival. If the fireworks are canceled, this event will proceed without them.

Although Japanese radio announcements claimed six times that she had been sunk, she survived many close calls and near misses. Most notably, on September 1942, a Japanese torpedo slammed into the Battleship’s port side hull just forward of the 12-inch thick armor belt designed to protect her. The enormous blast shook the Ship and crew and sent geysers of oil and water skyward. Tons of water quickly flooded through the large 32 x 18-foot torpedo hole. The water caused the Ship to list, but the crew quickly righted her by intentionally flooding compartments on the opposite side. Five men were killed and 23 were wounded. The area still reeks of oil and is unfortunately not accessible on the self-guided tour route. 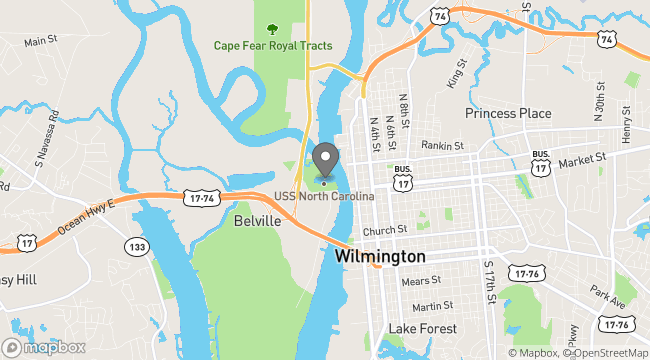 The Ghost Guild Inc. is a registered nonprofit organization based in the Triangle area of North Carolina. Founded on January 26th of 2017, we were selected as the official paranormal investigation team for the City of Raleigh Parks, Recreation, and Cultural Resources, serving as the exclusive team for Mordecai Historic Park and Theatre in the Park. We're also partnered with the Murfreesboro Historical Association through the end of 2023. We research unusual experiences that might be considered paranormal and we open some of our investigations to the public for educational purposes.